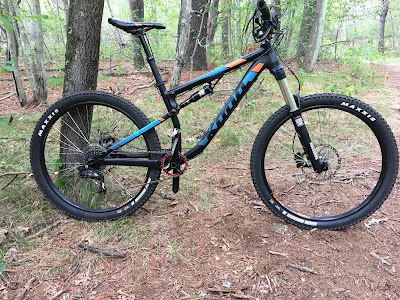 After spending a couple of months riding the Precept, the only thing I didn't really like is that it had a double chainring.  (It's the 2016 model - the 2017 is 1x11).   The big chainring was 36T, and I never used the small 24T ring.   But I was typically on the lowest/largest cogs on the cassette - cross-chained.    Also, the the access to the dropper control on the left side was complicated by the front shifter, which I never used.

I asked Dave at Bike Shop of Topsfied about converting the bike to 1X10, and he recommended a Wolf Teeth elliptical chainring.   I went with a 32T ring, figuring that this would put me in the middle of the cassette most of the time, and give me a bit lower 32-36 combination than I typically used (36-36). 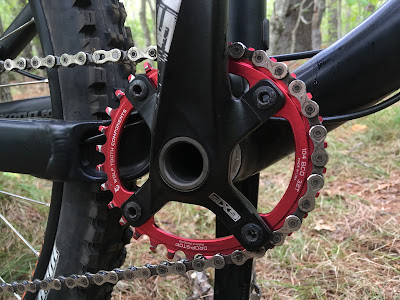 I'm really happy with the end-result.   The bike shifts much better, there's more ratios to pick from since I'm in the middle of the cassette, and the elliptical ring feels really great.   The idea is that it acts like a 34T where the pedal position is such that you have more power, and a 30T where you don't.   This feel of it isn't dramatic, it just feels much smoother at medium and low cadence for a given level of effort.   I'm thinking it would be really great to have on my single speed, perhaps allowing me to drop a couple of teeth on the cog.

Thanks to Dave for the recommendation and setup!